June 25, 2018
SUPARCO unveiled the model of PakTES-1A satellite at UNISPACE+50 event in Vienna. Expected to be launched on July, 2018, PakTES-1A is a medium reslution remote sensing satellite and weighs around 285 Kgs. 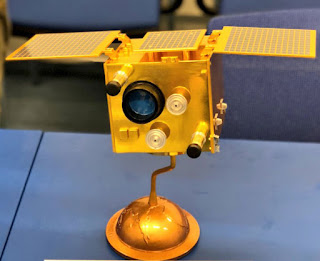 About 10 engineers from various disciplines actively participated in execution of this program. The main objective of this program was Know-How Training and Transfer on satellite design, assembly, integration and testing; and almost cost $9 million. PakTES-1A will be launched in sun-synchronous orbit at 610 KM and to save the cost, this satellite will share the same SLV carrying PRSS-1 on Long March 2C rocket. Once in the orbit, this satellite will provide significant information on design  and will also help evaluate various commercial of-the-self as well as indigenous components and subsystems.

Low level of budget, lack of capacity and technical know remains hurdle in development of advanced satellites in Pakistan. Even in case of this satellite, provision of Electro-Optical payload was sublet to Space Advisory Company (SAC), South Africa due to lack of capacity at local institutions. According Space Program 2040, Pakistan have total six remote sensing satellites planned to launch until 2040 and this dream will remain far from reality unless Pakistan develops low cost satellite on its own.